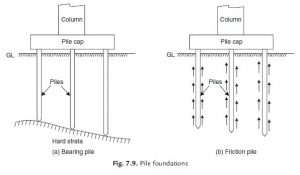 These are the difference between a pile foundation and an ordinary foundation.