Difference between Creep and Shrinkage

When concrete is subjected to compressive loading it deforms instantaneously. This immediate deformation is called instantaneous strain. Now, if the load is maintained for a considerable period of time, concrete undergoes additional deformations even without any increase in the load. This time-dependent strain is termed as creep.

Drying shrinkage (often, simply shrinkage) is the reduction in the volume of hardened concrete due to loss of moisture by evaporation.

There are several similarities and dissimilarities between creep and shrinkage. First, the source for both the effects are the same, which is loss of adsorbed moisture from the hydrated cement paste. In shrinkage, the loss is due to difference in the relative humidity of concrete and the environment, in creep it is due to sustained applied stress. Second, the strain-time curves of both the phenomenon are very similar. 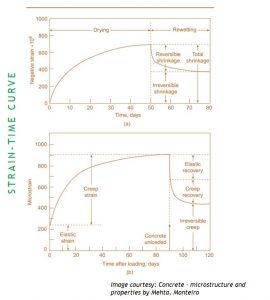 However, unlike creep, shrinkage is not dependent on the loading conditions. Shrinkage strains can also be recovered to a great extent as can be seen in the above curves. Shrinkage causes the development of tensile stresses in concrete when it is restrained in the structural members leading to cracking.

Because the primary cause is the loss of adsorbed water, the effects of shrinkage and creep can be mitigated to some extent by minimizing the water content in the concrete mix. These are the difference between Creep and Shrinkage