Honeycomb in concrete is basically caused due to improper mixing of material i.e Aggregates, Coarse sand and cement or may be due to excessive bleeding on cement slurry due to over vibration of concrete while concrete is being poured. 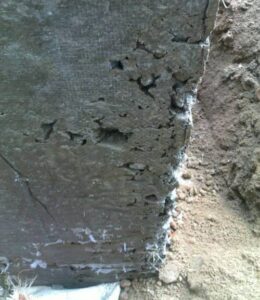 One need to understand that a column though is designed as compressive member but it is also designed for taking lateral dynamic loads as well. We all know that concrete is very good if subjected to compression loads, however for dynamic loading the steel is required. Both concrete and steel together makes an element which is cost effective solution for any building.

Now answering your question whether honeycomb in concrete columns is dangerous or not. We all know that column of any structure is designed to take the entire dead weight, live loads and dynamic loads of structure to foundations, thus if such occurrences of honeycomb is not treated in timely fashion, it may lead to carbonation (corrosion and flaking due to corrosion) of steel within the column due to penetration of moisture and moist air.

Thus treatment of honeycomb irrespective of its location – be it in retaining wall, shear walls, columns, beams, slabs etc. is very important, to safeguard the structure and structures life span.