There is no simple answer to your question. It requires for each case to study and think what is going on to the building and also the foundations.

Assuming we include in our studies the seismic zones as well and If a building is not optimised then the columns carry imbalanced normal stresses and means that usually is very less likely to have a formation of cracks in a middle column in horizontal/diagonal direction. In that case is much more likely to have formation of horizontal/diagonal cracking on the perimetric columns and especially corner columns due to smaller normal stress and higher eccentricity of the loading.

That is especial true after earthquakes , also and depending on the size of the cracks they dont cause whole structural failure. If a structure is optimised which is also common then normal stresses are a lot more balanced and formation of horizontal/diagonal cracks is usually less likely in both locations in static situations. 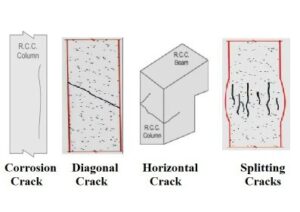 On the other hand the complete opposite happens for vertical cracks. In case of the middle column is quite more likely to be formed and especially for non optimized structures. This is also irrelevant of the seismic or not action and is an indication that a building undergoes over stressing.

In this scenario indeed, the building might have a complete loss of equilibrium and collapse in many circumstances. Equally important is for the perimeter columns, however depending on then lateral stability system of the building they could more rarely cause a whole structural collapse.

However, the modern structures are designed to not collapse under loss of a vital structural member such a ground floor column and in many cases the building will not collapse if a member will collapse.

For Conclusion , the middle column is more probable to cause whole structure collapse but is definitely not a rule.