Force can be defined as any action that tends to change the state of rest or uniform motion of a body.According to Newton’s first law of motion, you know that there should some external force required to accelerate a motion or move a particle from its rest position.

Unless no external force, the rigid body will move only at a constant velocity during its motion or rigid body does not move from its rest position.

The different characteristics of force systems are

The system of force is mainly classified in Coplanar and Non-coplanar.

In a collinear force system, the line of action of the entire force system is in the same direction. 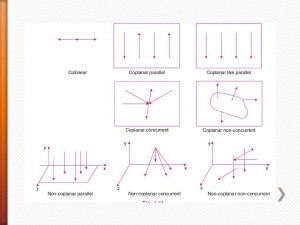