Water is an important thing in the daily life of a person.But do you ever think how this water comes to your home?If you are city person there has various distribution system available.

But village person like me, normally they get water from wells or bores and we know the correct sources of water.

We need to maintain certain water quality parameters before its use and we have water softening techniques to maintain the quality of water.

Watch the below video which shows the sewage treatment process. 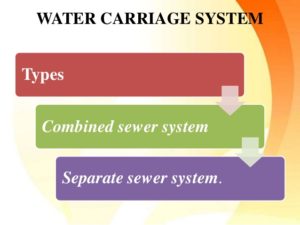 The separate system provides two separate systems of sewers the one intended for the conveyance of foul sewage only ,such faecal matter,domestic wastewaters,the washing ,and drainings of places such as slaughter housed,laundries ,stables and waste waters derived from the manufacturing processes and the other rainwater including the surface washing from certain streets overflow from public baths and foundations etc..

The combined system is advocated on the ground that street surface washings are as impure as the sewage itself and should, therefore, be suitably treated before being allowed to enter the natural stream.

In partially combined systems, only one set of underground sewers is laid.These sewers admit the foul sewage as well as the early washings by rains.As soon as the quantity of water exceeds a certain limit, the water overflows, this water is collected and conveyed in open drains to the natural streams.

What is Dry weather flow

The Ultimate Guide To hydrological cycle: How Hydrological Cycle occurs

Watch the below video which shows the sewage treatment process.