The engineers do not attempt to make earthquake-proof buildings that will not get damaged even during the rare but strong earthquake; such buildings will be too robust and also too expensive. Instead, the engineering intention is to make buildings earthquake-resistant; such buildings resist the effects of ground shaking, although they may get damaged severely but would not collapse during the strong earthquake. Thus, safety of people and contents is assured in earthquake-resistant buildings, and thereby a disaster is avoided. This is a major objective of seismic design codes throughout the world.

A building with identical vertical members and that are uniformly placed in the two horizontal directions, when shaken at its base in a certain direction, swings back and forth such that all points on the floor move horizontally by the same amount in the direction in which it is shaken.

But in most cases are buildings are not symmetrical, Hence there will be unequal amount of swing and shake. This will cause what is known as Twist or Torsion. This unequal movement will cause more damage to columns, which move more during the shake.

Buildings should be designed like the ductile chain. For example, consider the common urban residential apartment construction – the multi-storey building made of reinforced concrete. It consists of horizontal and vertical members, namely beams and columns. The seismic inertia forces generated at its floor levels are transferred through the various beams and columns to the ground. The correct building components need to be made ductile. The failure of a column can affect the stability of the whole building, but the failure of a beam causes a localized effect. Therefore, it is better to make beams to be the ductile weak links than columns. This method of designing RC buildings is called the strong-column weak-beam design method (Figure 4). 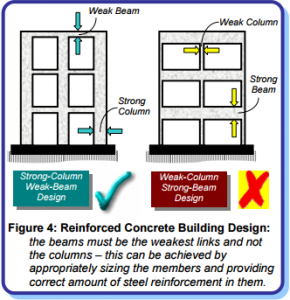