Use or Purpose of Shear reinforcement

The beam sags under increase loading which results in flexural failure. Therefore, Longitudinal bars are provided to resist tension due to flexure.

A Shear crack may develop which is inclined at 45° to the horizontal and it develops at mid-depth near the support grows towards the top and bottom. Shear failure is brittle and, therefore must be avoided.
So Stirrups are provided to resist such shearing action and also prevent the longitudinal bars from bending outward. 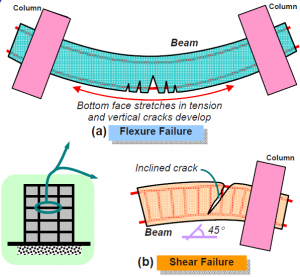 These are the main purpose or use of shear reinforcement.