What is a Hidden Beam?

Lastly, strict and rigid architectural consideration led to the provision of hidden beams. In this manner, the load which might be brick wall will be dealt with and height of the floor will not be compromised.

In this article, different aspect of reinforced concrete hidden beams will be discussed. 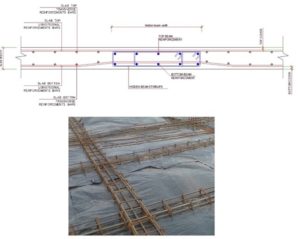 Hidden beams are desired structural element because of several advantages which include:

The disadvantage of hidden beam is that it has considerably low ductility due to height reinforcement ratio which is provided to compensate for depth restriction specifically at column connection.

Types of slabs in which hidden beams are introduced

Hidden beams are widely used in three types of slabs which include: