Creep can be defined as the elastic and long-term deformation of concrete under a continuous load. Generally, a long term pressure changes the shape of concrete structure and the deformation occurs along the direction of the applied load. When the continuous load is removed, the strain is decreased immediately. The amount of the decreased strain is equal to the elastic strain at the given age. This quick recovery is then followed by a continuous decrease in strain, known as creep recovery that is a part of total creep strain suffered by the concrete.

The ratio of the ultimate creep strain to the elastic strain at the age of loading is termed as creep coefficient. 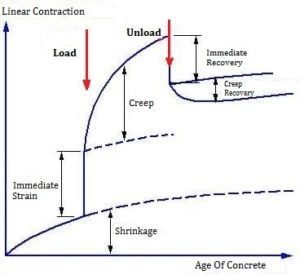 The factors that affect creep of concrete are similar to the factors affecting shrinkage which are as following:

The rate of creep is increased with increasing water cement ratio.

It is influenced by humidity and drying condition of the atmosphere.

The rate of creep rapidly decreases with time. The time taken by a concrete structure to attained creep is 5 years.

Aggregates with moisture movement and low elastic modulus cause a large amount of creep. The rate of creep generally decreases with the increase of the size of aggregates.

Some admixtures (mainly accelerators) are also responsible for causing creep in concrete.

Creep in concrete is a time-dependent phenomenon. It is the “inelastic deformation” of concrete under “sustained stress”.

For eg. if you compress a cylinder of concrete from the two plane sides, its length will undergo two kinds of change, one is elastic and the other inelastic. Elastic change( shortening in this case) will occur immediately and the member shall regain its original length on the removal of the load. On the other hand, the creep shortening will happen over a very long period of time, say 5 years, but the member will undergo permanent deformation and will not be able to regain its length in entirety (but only a part of total shortening happened due to elastic shortening).