There are a number of reasons why concete cracks and the types of cracks that develop are actually given different terms:

Crazing (actually looks like crazy paving): This is due to the rapid drying out of the top surface layer of concrete after it is poured (where it has a large surface area) and is predominant where the air lack sufficient humidity.

The removal of moisture through evapouration leads to the concrete shrinking as it drys (drying shrinkage), causing the formation of polygonal shapes in the upper layer. 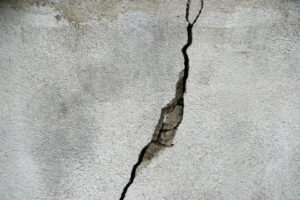 Poor mix design, bleeding & segregation: Bleeding is where the water to cement ratio is too high and segregation of then mix occurs with water seeping to the surface.

This coupeld with a lack of humidity can, again lead to loss of moisture as water evapourates, leading to crazing. However, if segregation also occurs, the water content may force particles apart to a point where, as the concrete cures, stresses develop, causing it to segregate and crack.

High heat of Hydration: This doesn’t take too long to for but usually develops in tick concrete pours, where the core of the concrete heats up as chemical reactions take place.

The result is that the concrete to the centre (core) expands, whils the outer surfaces contract and deep cracking occurs in the concrete as it sets. Control measures, believe it or not, include chilling of aggregate to off-set the heat given of during the chemical reaction and use of ggbfs and pfa to prolong hydration through substitution of cement.

In this instance, given you’re pouring RCC slabs, its likely due to loss of surface moisture from the mix. It can be limited by actually stopping wind/ air from rushing over the surface of the freshly poured mix, misting the area may work to increae the relative humidity of the local air.

For smaller batches, wet hessian rags were historically used to keep the humidity high whilst the concrete cured. You’ll probably find that once the slabs have completely cured, dusting will occur on the surface, which pretty much reflects the loss of moisture, cessation of hydration in the top layer of the pour.