For attaining the desired strength of your concrete, you know that you have to do proper curing to the concrete for the hydration of cement.

For a good cement hydration, you need to maintain proper water content on the surface of the concrete unit. After adding water, the evaporation is carried out throughout the curing period.

Curing of concrete is the method of maintaining the required amount of water content and temperature in a fresh concrete for a specific period of time.

The objective of water curing of concrete is to prevent the moisture loss from the concrete and attains a convenient temperature.

The next thing that you need to take care after deciding water-cement ratio is curing period of concrete or you can say curing time. 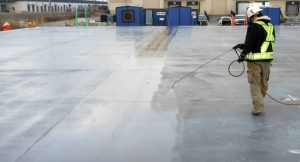 What is the right time or period required for concrete curing process?

The American concrete institute recommends the minimum curing period time is the period corresponding to concrete achieving 70 percent of the characteristic compressive strength of concrete. The 70 percent of characteristic compressive strength achieves at its 7 days from casting of concrete. So a minimum curing period of 7 days should be done.

According to ACI, there are three stages of curing of concrete initial, intermediate and final.

The initial curing is evaporation losses from bleeding water of concrete. You know that for every concrete construction, there will be a few amounts of bleeding water remains on the surface of the concrete.

The drying of concrete starts only after the evaporation loss of bleeding water. Initial curing is required to prevent the plastic shrinkage cracks of concrete

The final curing will be done only after the final setting of concrete. Final curing is done to prevent the loss of water content from the surface quickly.