There are lots of ways, many involving boring machines, but I will mention how the George Massey Tunnel south of Vancouver was built. 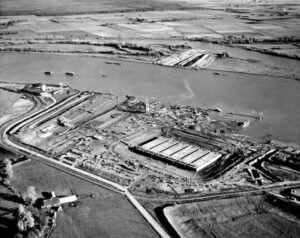 This is the site of the crossing. In the foreground you can see 6 rectangular structures. These are the tunnel sections made out of reinforced concrete. The sections were laid in pairs so 3 sections would make up the north bound lane and three the south bound lane.

When they were completed, the pit they were built in was flooded and the retaining wall to the river removed. The sections were then floated into place and then sunk into the river where they fell into a channel dredged for them. Each section was connected to the others, the channel was backfilled burying the sections, and then the water was pumped out.

Incidentally, the tunnel marks the lowest point of any highway in Canada, being lower than sea level.