Width of a single lane which has only one way is 3.5m

Width of single lane which has two way is 3.75m

Width of every additional lane is 3.5m

Therefor the total width of n number of lanes= 3.5* n

These types of carriage ways are provided usually when there is lane width needed more than single lane but less than two lanes.The lane width of intermediate carriage way is 5.5m 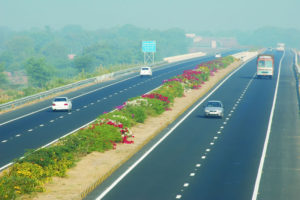 There are two types of friction present in the road

The value of lateral friction is limited to 0.15

Pavement uneveness is the average of the undulations in the surface of the road.It is represented in cm/km

The main reason for the deterioration of roads is due to water.So the road should be designed in such a way that,whenever the water falls on the road, the water should be fastly removed.When water enters into the road, the aggregate has more affinity towards water and it absorbs water.Due to this process,the bond between aggregate and binder will reduce.This causes deterioration to the road or pavement.

The central portion of the straight line camber is sharp