The standard consistency of a cement paste is defined as that consistency, which will permit the vicat plunger to penetrate to a point 5 to 7mm from the bottom  of the vicat mould when tested as described below. 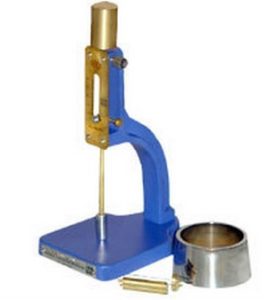 Needle for the final setting time.

The gauging time shall be counted from the time of adding water to the dry cement until commencing to fill the mould.Fill the vicat mould  with this paste, the mould resting upon a non-porous plate.After completely filling the mould ,smoothen the surface of the paste,making it level with the top of the mould

This operation shall be done immediately after filling the mould.Prepare trial test specimens with varying percentages of water until plunger penetrates to a point  5 to 7 mm from the bottom of the vicat mould,which is read on the scale.Express the water required as percentage by mass of the dry cement to the first place of the decimal.