In Limit state of serviceability, the deflection limits as per IS 456-2000.The following criteria are adopted for attaining proper performance of beams and slabs

The final defection due to all loads including the effects of temperature.creep and shrinkage should not exceed span/250.This limitation is to control the cracks

The deflection occurring after the construction of finishes and partitions should not exceed span/350  or 20mm whichever is less.This limit is intended to avoid damage of partitions and finishes 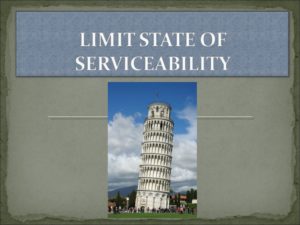 Deflection in Reinforced Concrete members may be divided into two types

This is the method for calculating the deflection.

Deflection due to shrinkage depends on

Creep defection due to permanent loads

One thought on “Limit State Of Serviceability-Design of Reinforced Concrete”