Types of Errors in Levelling- Instrumental, Natural and personal errors

The main types of errors in levelling arise due to three principal sources, they are instrumental errors, natural errors and personal errors.

a. Error due to imperfect adjustment

The essential adjustment of a level is that the line of sight shall be parallel to the axis of the bubble line. If the instrument is not in this adjustment, the line of sight will either be inclined upwards or downwards when the bubble is centred and the rod readings will be incorrect. The error in the road reading will be proportional to the distance and can be eliminated by balancing the backsight and foresight distances. The error is likely to be cumulative, particularly in going up or down a steep hill, where all backsights are longer or shorter than all foresight unless care is taken to run a zigzag line.

b. Error due to sluggish Bubble

If the bubble is sluggish, it will come to rest in the wrong position, even though it may creep back to the correct position while the sight is being taken. Such a bubble is a constant source of annoyance and delay.

c. Error in the movement of the objective slide

d. Rod not of Standard length

The effect of curvature is to increase the rod readings. When the distances are small the error is negligible, but for greater distances when the back and foresight are not balanced, a systematic error of considerable magnitude is produced.

This effect makes actual level rod readings too large by:

where D is the sight distance in thousands of feet. 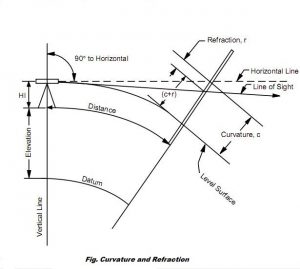 Due to refraction, the ray of light bends downwards in the form of the curve with its concavity towards the earth surface, thus decreasing the staff readings. Since the atmosphere refraction often changes rapidly and greatly in short distances, it is impossible to eliminate entirely the effect of refraction even though the backsight and foresight distances are balanced

The formula for computing the combined effect of curvature and refraction is:

Where C = correction for curvature

d. Settlement of tripod in the natural turning point

a. Mistakes in Manipulation

This includes mistakes in setting up the level, imperfect focussing of eye-piece and of objective, errors in centring the bubble and failure to watch it after each sight, and errors due to resting hands on tripods or telescope. In the long sights, the error due to the bubble not being centred at the time of sighting is more important.

If the rod is not in plumb, the reading taken will be too great. The error varies directly with the magnitude of the rod reading and directly as the square of the inclination. In running a line of levels uphill, backsight readings are likely to be increased more than foresight from this source and the elevation of a benchmark on the top will be too great.

The error is caused when it is difficult to tell when the crosshair coincides with the centre of the target in target rod and to determine the exact reading which the cross=hair appears to cover in the case of the self-reading rod.

d. Mistakes in reading the rod

These are the common errors in levelling.

Read More: Do you know which are the important areas of application of levelling?

Read More: Why total station is more used instead of levels?