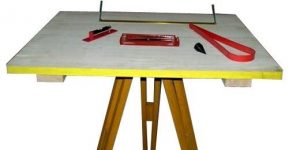 Errors due to the bad quality of the instrument. This includes all errors described for theodolite if telescope alidade is used,

2.Errors due to plotting

3.Errors due to manipulation and sighting

The accuracy of a plane table mapping depends largely upon the precision with which points are sighted. The plain alidade with open sight is much inferior to the telescopic alidade in the definition of the line of sight.

Orientation done with a compass is unreliable, as there is every possibility of a local attraction. Erroneous orientation contributes to the distortion of the survey. The orientation should be checked at as many stations as possible by sighting distant prominent objects already plotted.

d) Movement of the board between sights

Due to the carelessness of the observer, the table may be disturbed between any two sights resulting in the disturbance orientation. To reduce the possibility of such movement, the clamp should be firmly applied. It is always advisable to check the orientation at the end of the observation from a station.

It is very essential to have a proper conception of the extent of error introduced by inaccurate centring, as it avoids unnecessary waste of time in setting up the table by repeated trials.

These are the most common Errors in Plane Table Surveying. Hope you like this article.