TYPES OF DEFECTS IN PLASTER

The causes and repair methods for each are discussed below.

Crazing is a network of fine cracks, usually in a hexagonal pattern, which measure between 5 and 75 mm across each hexagon. They are usually very fine and shallow and do not extend through the whole depth of the plaster. They are usually the result of over trowelling a rich mix (one with high cement content) or using sand containing an excessive amount of dust (more than 15% by mass passing a 0,075 mm sieve).

Crazing often occurs within a few hours of the plaster being applied to the wall and cracks may hardly be visible until dust or moisture makes them noticeable. Craze cracks are of little importance, do not open and close with time, and can be covered using reasonable quality paint. If necessary, glass fibre tissue can be applied during the painting operation.

Map cracking is similar to crazing except that it is usually deeper (sometimes going through the plaster) and the hexagons of the pattern may measure up to 200 mm across. These cracks normally occur when a plaster mix with high cement content is used or the plaster is allowed to dry too quickly.

When the cracks are noticed while the plaster is still plastic, they are often floated closed, only to reappear some time later. These cracks can be filled with proprietary filler and painted over. Glass fibre tissue can also be applied during painting.

Cracking which results when an excessive amount of water is lost from the plaster in the first hours after application is known as plastic shrinkage cracking. Map cracking can be due to plastic shrinkage as can the horizontal cracks which form at corners and between windows.

Drying shrinkage cracks are the result of moisture loss after the plaster has hardened. Plaster will always shrink and crack so it is desirable that is should develop a large number of fine, unnoticeable cracks at close spacings. Plasters with very high cement contents and those which are made with poor quality sands having a high water requirement will tend to develop a few, widely-spaced cracks. Plaster applied in layers that are too thick will also tend to crack in this way. These cracks are normally stable and can be filled with proprietary filler and painted over.

Some cracks visible in the plaster may result from cracking of the wall. This can be caused by differential movement of the foundations, moisture expansion or drying shrinkage of masonry units, or thermal movement of the roof. This type of crack often forms in straight vertical or horizontal lines, or in stepped diagonal lines, and may be quite unsightly. The crack width will often vary with the seasons.

Because these cracks originate in the wall and not in the plaster, repairing the plaster is ineffective. A specialist should be called in to establish the cause of the cracking and to recommend remedial measures.

Such measures may include structural alterations which change cracks into movement joints. Visible joints can be hidden by cover strips fixed on one side of the joint or sealed with elastomeric sealants.

Debonding of plaster is often noticed as a hollow sound when the surface is tapped. Plaster is inclined to curl and debond from the wall because the outside skin of the plaster that is exposed to the air will shrink at a different rate from the plaster in contact with the wall. This is especially true of excessively thick plaster layers. Because debonding is generally the result of inadequate preparation of the substrate, it is important to make sure that the bond between plaster and wall is as good as possible. This can be done by:

Small areas of debonding (about the size of a plate) are not significant, but larger areas should be removed and replaced.

There are no specifications covering the hardness or strength of plaster, and there is no reliable way of measuring it. Evaluation is often carried out by scratching the surface with a hard sharp object such as a screwdriver or a key, and is consequently quite subjective.

It is often better to have a slightly weaker plaster that is less likely to show significant cracking or debonding than one which is too strong. However, very weak plasters will be unable to resist impacts, will have reduced resistance to water penetration and picture nails will tend to fall out. They also tend to encourage moss growth on sheltered faces particularly if poor quality paint is used.

There are five common causes of soft plaster:

The only one of these causes which can be confirmed by testing hardened plaster in the laboratory is that of insufficient cement.

Unpainted plaster can be treated with methyl methacrylate products. These materials may increase hardness to some degree.

Painted plaster can only be removed and replaced. The inconvenience of this option has to be weighed up against living with the weak, unsatisfactory plaster. A coat of high quality exterior paint will normally reduce the risk of water penetration to acceptable levels if the plaster is strong enough to hold such paint. Areas which are particularly susceptible to impact, such as corners, can be re-plastered with relatively little disruption.

Grinning is the term given to the appearance of a plastered wall when the positions of the mortar joints are clearly visible through the plaster. It is caused by the difference in suction between the masonry units and the mortar. Raking out mortar joints also causes grinning and the practice should thus be limited to soft clay brickwork. 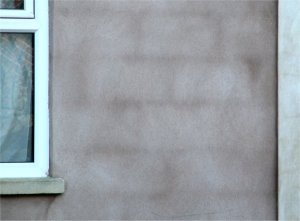 While grinning may be unsightly, it is unlikely to lead to further cracking. The choice is to live with it, or to remove and replace the plaster. Application of an undercoat or a spatterdash coat before plastering will help to avoid grinning.

This includes swelling, softening, layer cracking and spalling of the plaster. It is usually caused by the inclusion of proprietary gypsum-based products in the mix. Under moist conditions, the sulphate from the gypsum reacts with the Portland cement paste and forms compounds of increased volume which disrupt the plaster.

The only remedy for expansion-induced disruption due to gypsum in the mix is to remove and replace the plaster.

Pop outs are conical fragments that break out of the surface of the plaster leaving holes which vary in size. They are caused by the presence of contaminant particles in the mix which, reacting with the moisture in the mix, expand and cause cavities in the plaster. Contaminants are usually seeds, other organic material, or particles of dead burnt lime.

Once the cause of the pop out has been removed, the hole can be filled with proprietary filler and painted over.