In this post, I am going to discuss some effects of superplasticizers on the workability of fresh concrete. Superplasticizer is a type of admixture which is added during concrete making to improve its certain properties.

Effect of Superplasticizers on Workability of Fresh Concrete 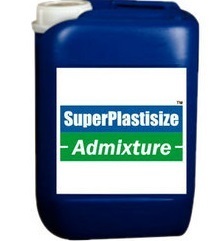 It has been already explained while describing the Marsh cone test that the dosage of superplasticizer influences the viscosity of grout and hence the workability of concrete.

The optimum dosage can be ascertained from Marsh cone test if brand of cement, plasticizer and w/c ratio is already fixed. Simple Marsh cone test can give realistic dosage than manufacturers instructions which is general in nature.

The mix composition particularly the aggregate/cement ratio or richness of the mix, w/c ratio, and use of other supplementary cementing materials like fly ash or silica fume affects the workability.

Wetter the mix better is the dispersion of cement grains and hence better workability. The size and shape of aggregate, sand grading will also have an influence on the fluidifying effect.

The variability in cement with respect to compound composition, in particular C3A content, C3S/C2S ratio, fineness of cement, alkali content and gypsum content are responsible for the lack of compatibility with a particular type of superplasticizer and their performance in concrete.

Plasticizer must be properly and intimately mixed in concrete to bring about proper dispersion with cement particles. Therefore, hand mixing is out of question. When you use concrete mixer, generally about 80% of the total water is added to the empty drum and then materials are loaded into the drum by hopper. When you use superplasticizer, it is better to add all the water to the drum keeping about one litre of water in spare.

The exact quantity of superplasticizer is diluted with that one litre of water and thrown into the drum in two or three installments over the well mixed concrete so that proper dispersion of plasticizer actually takes place in the drum.

It has been discussed above that inefficient spot mixer at site or laboratory that is small mixer does not exploit the action of superplasticizer fully, often they do not even mix the concrete uniformly and properly.

The slump value of a superplasticized concrete may also be affected on account of other admixtures used concurrently in concrete such as air-entraining agent, fly ash, slag or silica fume. The temperature and relative humidity also affect the result.

These are the Effect of Superplasticizers on Workability of fresh concrete.