Fire resistance of concrete structure is determined by three main factors—the capacity of the concrete itself to withstand heat and the subsequent action of water without losing strength unduly, without cracking or spalling; the conductivity of the concrete to heat; and coefficient of thermal expansion of concrete. 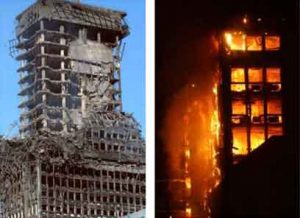 In the case of reinforced concrete, the fire resistance is not only dependent upon the type of concrete but also on the thickness of cover to reinforcement, The fire introduces high-temperature gradients and as a result of it, the surface layers tend to separate and spall off from the cooler interior. The heating of reinforcement aggravates the expansion both laterally and longitudinally of the reinforcement bars resulting in loss of bond and loss of strength of reinforcement.

The effect of increase in temperature on the strength of concrete is not much up to a temperature of about 250°C but above 300°C, definite loss of strength takes place. Hydrated hardened concrete contains a considerable proportion of free calcium hydroxide which loses its water above 400°C leaving calcium oxide.

If this calcium oxide gets wetted or is exposed to moist air, rehydrates to calcium hydroxide accompanied by an expansion in volume. This expansion disrupts the concrete. Portland blast furnace slag cement is found to be more resistant to the action of fire in this regard.

In mortar and concrete, the aggregates undergo a progressive expansion on heating while the hydrated products of the set cement, beyond the point of maximum expansion, shrinks. These two opposing actions progressively weaken and crack the concrete.

The various aggregates used differ considerably in their behavior on heating. Quartz, the principal mineral in sand, granites, and gravels expands steadily up to about 573°C. At this temperature, it undergoes a sudden expansion of 0.85%. This expansion has a disruptive action on the stability of concrete. The fire-resisting properties of concrete are least if quartz is the predominant mineral in the aggregate.