A beam is a horizontal member of a structure, which carries transverse load acting on them. The loads on beams include a load from the roof slab or load from the floor slab and self-weight of the slab panel. The beam is rectangular in cross section.The types of beams are described below.

Types of beams-Beams in Structural memebers

In fixed beam the two ends of the beams are rigidly support.Main reinforcement and stirups are provided.It does not allows vertical,horizontal or rotational movements.Simply we can say that displacements are not allowed.The ends have fixed end moment

Fixed end moment are reaction moments under certain load conditions when both the ends are fixed.

In overhanging beams,its ends are extend beyond column the wall or coloumn support. 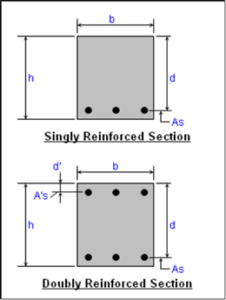 The beam that is longitudinally reinforced only in tension zone, it is known as singly reinforced beam. In Such beams, the ultimate bending moment and the tension due to bending are carried by the reinforcement, while the compression is carried by the concrete.

The beam that is reinforced with steel both in tension and compression zone, it is known as doubly reinforced beam. This type of beam is mainly provided when the depth of the beam is restricted. If a beam with limited depth is reinforced on the tension side only it might not have sufficient resistance to oppose the bending moment.