Use of analytic lens in tacheometric surveying

Tacheometry is a branch of angular surveying in which the horizontal and vertical distances of points are obtained by instrumental observation. The instrument usually employed in tacheometry is a tacheometer and a levelling staff. A tacheometer in a general sense, is a transit Theodolite having a stadia telescope i.e. a telescope fitted with a stadia diaphragm, i.e. a telescope equipped with two horizontal hairs called stadia hairs in addition to the regular cross- hairs. 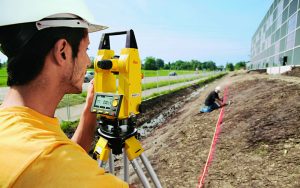 Where f/i is multiplying constant and (f+d) is additive constant.

The object of providing an additional convex lens, called an anallatic lens, in the telescope is to eliminate the additive constant (f+d). That means (f+d) will be zero.

The benefit of that is at the time of calculation (f+d)Cosθ and (f+d)Sinθ will be Zero.