Theodolite is used for measuring the horizontal and vertical angles.Here we are going to learn about different transit theodolite parts.

The telescope is the major components of theodolite, Telescope is mounted on a spindle or horizontal axis or trunnion axis. Internal focusing type telescope is widely used. 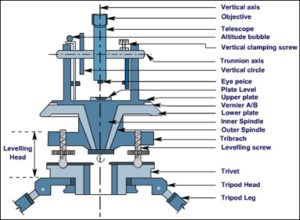 Two verniers are fitted to read the vertical circle. Clip screw is used for slight adjustment. Altitude bubble is placed at the top of index frame.

Compass is one of the main parts of theodolite. Compass is used to measure the angle between the normal line and line of sight. There are two types of the compass, prismatic compass, and surveyor compass

Tripod the main part needed for a theodolite and it is used for supporting theodolite.

Hope you enjoyed this article about different components or parts of transit theodolite and its functions.If you like this post? Dont forget to share it with your friends.

Read More: Do you know what are the different tests in survey lab?