We actually love escalators and enjoy riding the long ones in airports and malls.

We also love climbing stairs, both up and down, so we would never get rid of the stairs in our house unless it was absolutely necessary for physical reasons.

Our house in Florida is on one floor, and doesn’t even have a basement. So about the only stairs were the two tiny ones to get into the house.

Having no stairs was one of the things we missed the most about staying there, outside of snow, cold, ice, wind, and howling blizzards of course.

Sometimes stairs aren’t always nice to humans or elves, and conspire to kill you when you least expect it. Or at the very least are conplicit with other nefarious things, like socks, to complete our extermination.

We usually like socks, and have some big, fuzzy, cool ones with kitties, elves, and even puffins on them.

Still looking for socks with rutabaga or stroopwafels on them however.

Socks keep your tootsies warm, and keep your feet from getting messed up by rough shoes or floors.

For things like hiking, skiing and just walking around, we frequently wear less elaborate, and more mundane and practical socks.

And these are the ones that you just can’t trust.

My sister bought an inexpensive 12 pack of rather plain socks, and we both were trying them out by walking around the house. All went well until my sister attempted to walk down our old and rather slick staircase.

And even though the stairs were a bit treacherous, we never slipped, crashed, or plummeted down those stairs.

My sister tried going down them with those new socks.

She got about half way, and suddenly her feet were higher than her head. Not a good position to be in, especially when going down stairs.

Of course, what goes up has to come down, and down she did come. Right on her scrawny buttocks.

I guess at times like this it’s preferable to have fleshy buttocks.

My sister let out a scream, and expletives in several different languages as she fell back down on the stairs.

She tried to stop her excessively rapid decent by sticking her foot into the small railing that we have on the bottom of the staircase, but all that did was to break the railing and hurt her foot. 🙁

I saw what happened to my sister, so I started down the same stairs to see if she was all right.

With the same results.

Instead of landing on the stairs.

My scrawny buttocks landed directly on top of my sister.

It softened my landing, but certainly didn’t improve my sister’s mood any.

Turned out those socks were slick as ice. We named them our suicide socks, and after almost killing ourselves several times while wearing them, we ended up using them for cleaning.

At least when they’re not trying to kill us. 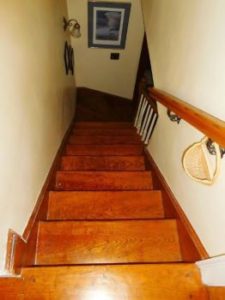 Our cool old staircase. Note broken railing on the bottom. 🙂 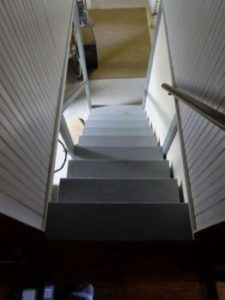 Staircase to basement. A lot easier to walk down. Except if you’re 6 feet or taller, you’ll bonk your head if you’re not careful.