They are quite different. American roads are largely designed and built for cars.

British Roads have been used for hundreds, if not thousands of years for people, animals, herds, and carriages and wagons. Cars are a very recent invention on these roads. On the way to my son’s school I have about four miles of these roads. My son took this photo, the roads maybe eight foot wide with no curb or road markings. 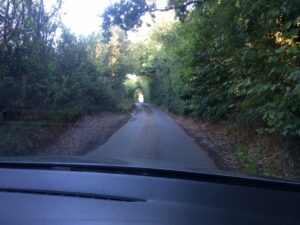 This road is a 60mph limit and is a two way road. About every 50 to 100 yards there’s a widening in the road for overtaking. People drive quickly and must remain very alert. In a week’s worth of driving to school and back I might have to stop and reverse 20 yards to let a train of traffic past. Obviously not all our roads are like this but most people that don’t live in cities will use roads like this fairly often.

The roads follow ancient pathways winding their way through the landscape. Aside from motorways (our equivalent to freeways) the roads are twisty, fast and fun. Our cars are different for this reason. They are on the whole smaller and lighter for better handling and cornering as well as having firmer suspension, better brakes and softer tyres for better grip.

When driving in the US, I feel like I am captaining a ship, turning the wheel long before the car turns and braking very early unable to stop in time compared to European cars. That’s not a criticism though, American cars are much more suitable for American roads and journeys.

Our roads are fast, fun and due to our extensive driver training system, surprisingly safe.

Motorways aren’t that different to any country, including the US, wide, fairly straight and well signposted. This is the junction from the M1, the main motorway heading north from London at my turn off.