Pamban bridge (the railway bridge) connecting Rameshwaram with mainland was constructed over 100 years ago. In spite of the minimum availability of technologies in those days, this bridge was completed within 3 years. 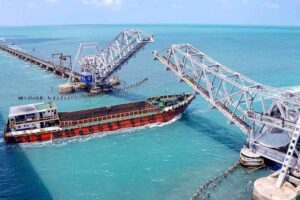 This is the basic principle behind a cantilever bridge. The bridge is constructed by extending cantilever supports on both the sides. For this type of construction, the supporting edge should possess hard rock underneath to withstand the cantilever. The arms which lift up for the passage of vessels, cargo ships is a suspended span.

Usually bridges are constructed as slabs over supports. Considering the marine factors, cantilever construction was one of the earliest methods in sea bridge construction.
How was it possible?
The entire bridge is supported through viaduct construction (i.e) piers (these piers must have been casted in the land and brought to the sea) were driven into the sea and a vertical structure was constructed over it. These structures served as the cantilever supports for smaller spans. There are 145 such spans over the entire length of the bridge. 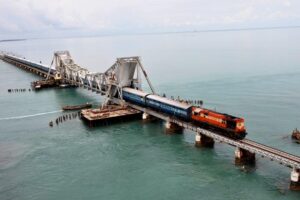 The lifting arms were lifted by winches on either side, which in turn was operated by mechanical lever during any passages. It is said that over 600 workers were involved in the construction work of pamban bridge.
Since the bridge is prone to high corrosion and cyclones, maintenance is a tedious job. It is considered as the second deadliest railway line in the world by the National geographic channel. Kudos to all those workers who strive for the proper maintenance that keeps the line alive!!