Shree Kopeshwar Temple (Khidrapur, Maharashtra): Despite smaller as compared to other temples listed, it is a gem in its own terms. This is a 12th Century temple which was built by Shilahar and Yadava Kings. It was constructed in four parts and later connected through vestibules. There are 48 intricately carved pillars in different shapes that support a ceiling which is open to the sky. The elephant carved at its base supports the weight of the temple. 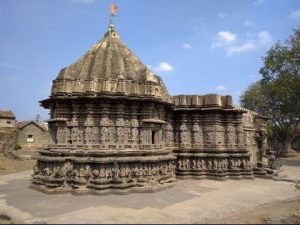 Chennakesava Temple (Somanathapura, Karnataka): Located on the banks of the Kaveri river, this is one of the most iconic Hoysala Architecture example. The temple was constructed by Dandanayaka Somanatha under the orders from 13th century King Narasimha III. It is a three-shrined structure temple constructed in Hindu mythology’s 16-point star-shaped plan. It is dedicated to 3 forms of Vishnu. There are innumerable depictions of Hindu mythology like the epics of Ramayana, the Mahabharata, and other various Hindu deities carved intricately. 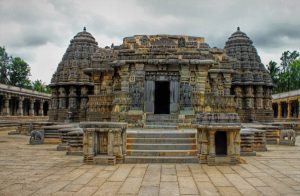 Kedareshwara Temple (Halebidu, Karnataka): It was commissioned by King Veera Ballala II and his queen Ketaladevi of Hoysala. It is an archaeological masterpiece and is made out of Soapstone. This is a three-shrined structured temple built before 1219 AD dedicated to Shiva. 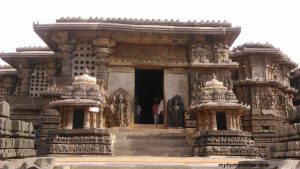 Sun Temple (Modhera, Gujarat): This temple is overshadowed by the much more famous Sun temple of Konark located in Orissa. It is still a sight to behold. It is a masonry masterpiece constructed the Solanki dynasty. It was constructed under the orders of King Bhimdev I. The temple complex constructed around 1027 AD has numerous patterns as well as engravings of Gods, Goddesses, and daily life. 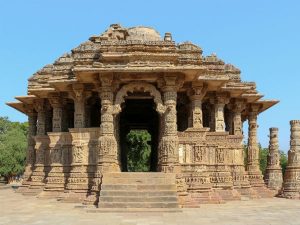 Kanchi Kailasanathar Temple (Tamil Nadu): This temple is the oldest structure in Kanchipuram. It was built around 700 CE by King Narasimhavarman II of Pallava dynasty. It is almost completely carved out of the sandstone. It is dedicated to Lord Shiva and has numerous astounding sculptures of Lord Shiva in his various formations. 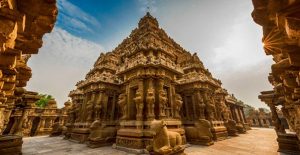