“Snap ties” are steel rods that hold wall forms together at a certain spacing, the cones allow the forms to be wedged tightly together so that the wall thickness is maintained during concrete placement. After the concrete has set, and the forms are removed, these steel rods are twisted, and a crimped or notched spot on each rod breaks so the protruding portion is removed and the remaining portion of the rod is recessed into the wall. 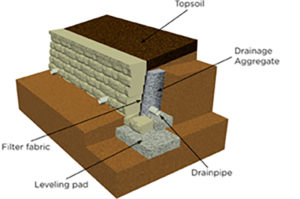 This is the reason for the name “snap” tie…the rod that ties the forms snaps when twisted. The plastic cone leaves a depression in the concrete that can be filled with a concrete patching material leaving the surface flat.

For unfinished walls, a steel washer may be found on the snap ties that maintains the space between forms, but doesn’t leave a depression in the finished concrete surface. They are less likely to crush than the plastic cones, but are more work to smooth after the forms are stripped.

Formwork that relies on snap ties to support it are very strong, rigid systems. They are often built with 3/4 inch “formply” plywood, wood studs, whalers with “pig’s feet” clamps, Jahn clamps, Simpson clamps, or other mechanical wedges to secure the whaler boards to the stud frames, along with “stiff backs” and other structural framework to support the forming system. Why? Because plastic (wet) concrete is very heavy, weighing in at over 3,000 pounds per cubic yard, and when it is consolidated using a concrete vibrator, pressure on formwork can be very high. With good forming practices and proper spacing of snap ties, studs, and whalers, a flat, plumb wall can be cast in place with confidence.