Akashi-Kaikyo Bridge is the longest span bridge in the world, located in Akashi Strait between Kobe and Awaji Island in Hyogo Pref. The total and central span lengths are 3,911m and 1991m respectively. The suspension bridge connects the city of Kobe (mainland of Honshu) to Iwaya (Awaji Island) in Japan. The spectacular view of the bridge in the night resulted in the name, Pearl Bridge.

The bridge was opened to traffic on 5 April 1998. It has six lanes of roadway, three in each direction. It consists of three spans. The length of the central span is 1,991m, currently the longest span for a suspension bridge. The end spans are 960m long each. The bridge is located at a height of 280m from the sea level. Construction of the bridge began in May 1988 and took nearly ten years to complete. The foundation depth of the bridge is equivalent to that of a 20-storey apartment. The total cost incurred for the bridge completion was $4.3bn 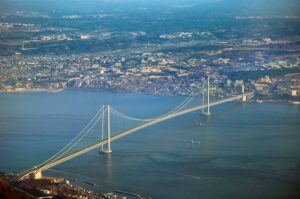