The type of survey which involves a number of connected survey lines and form a frame work is called traverse surveying. 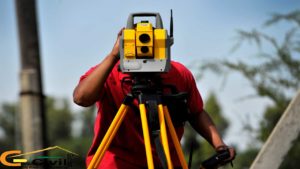 Chain traversing is the simple method in types of traverse surveying.The whole framework of survey is done with the help of chain and tape only. 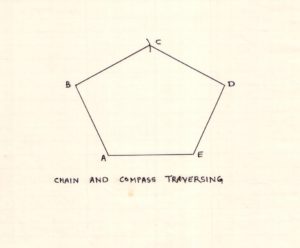 Linear measurements are done with help of chain or tape.The bearings can be measured with compass.Both fore bearing and back bearing are observed at each station.

In fast needle method, a theodolite fitted with a compass and tape are used.The magnetic bearings of lines are measured with magnetic meridian.It is more accurate compared to loose needle method,because least count of theodolite is more than a compass.

2.By measurement of angles between lines

In this types of transit traversing,using theodolite angles between the lines are directly measured and framework is constructed.This is the most accurate of all these methods.

To begin any traverse, a known point must be occupied. (To occupy a point means to set up and level the transit
or theodolite, directly over a monument on the ground representing that point.) Next, a direction must be
established. This can be done by sighting with the instrument a second known point, or any definite object,
which is in a known direction from the occupied point.

The object that the instrument is pointed to in order to establish a direction is known as a backsight. Possible examples would be another monument on the ground, a radio tower or water tank on a distant hill, or anything with a known direction from the occupied point.

A celestial body such as Polaris or the sun could also be used to establish an initial direction.
Once the instrument is occupying a known point, for example point number 2, and the telescope has been
pointed toward the backsight, perhaps toward point number 1, then an angle and a distance is measured to the
first unknown point. An unknown point being measured to is called a foresight.

With this data, the position of this point (let’s call it point number 100) can be determined. The next step is to move the instrument ahead to the former foresight and duplicate the entire process.