In this post, I am going to discuss the types of meridians in surveying. Surveying is a branch which is widely used in civil engineering.

Types of Meridians in Surveying

a) Astronomical or True Meridians

A plane passing through a point on the surface of the earth and containing the earth’s axis of rotation defines the astronomical or true meridian at that point. Astronomical meridians are determined by observing the position of
the sun or a star. 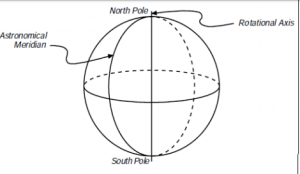 For a given point on the earth, its direction is always the same and therefore directions referred to the astronomical or true meridian remain unchanged. This makes it a good line of reference. Astronomical or true meridians on the surface of the earth are lines of geographic longitude and they converge toward each other at the poles. The amount of convergence between meridians depends on the distance from the equator and the longitude between the meridians.

A magnetic meridian lies parallel with the magnetic lines of force of the earth. The earth acts very much like a bar magnet with a north magnetic pole located considerably south of the north pole defined by the earth’s rotational axis. 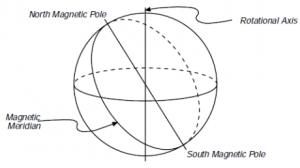 In-plane surveys, it is convenient to perform the work in a rectangular XY coordinate system in which one central meridian coincides with a true meridian. All remaining meridians are parallel to this central true meridian. This eliminates the need to calculate the convergence of meridians when determining positions of points in the system. 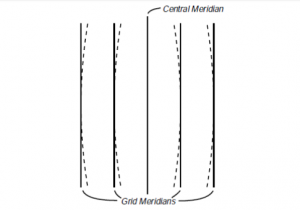 The methods of plane surveying, assume that all measurements are projected to a horizontal plane and that all meridians are parallel straight lines. These are known as grid meridians. The Oregon Coordinate System is a grid system.

On certain types of localized surveying, it may not be necessary to establish a true, magnetic, or grid direction.
However, it is usually desirable to have some basis for establishing relative directions within the current survey. This may be done by establishing an assumed meridian.
An assumed meridian is an arbitrary direction assigned to some line in the survey from which all other lines are
referenced. This could be a line between two property monuments, the centerline of a tangent piece of roadway, or even the line between two points set for that purpose.

The important point to remember about assumed meridians is that they have no relationship to any other meridian and thus the survey cannot be readily (if at all) related to other surveys.