Balloon framing leaves out the beams that these days separate the stories of a house.

Balloon framing goes back to a time when lumber was mostly produced on-site or nearby from local timber. Board lengths of 16–20 feet were common and ready at hand or easy to transport to the building site. A two-story balloon framed house often used studs that long — and they were truly two inches by four inches, and usually oak or poplar.

One drawback to balloon framing was the necessity to install firestops (horizontal boards between studs) at regular spacings. Without firestops, the channels between the long studs became furnace chimneys in case of a house fire. 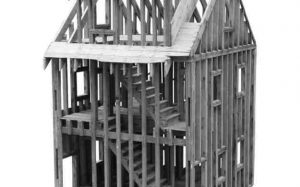 Modern post and beam framing builds the house one story at a time. The posts are nominal 2×4 studs and the beams are double top plates across the tops of those studs. Floor/ceiling joists rest on the tops of those beams, rather than being nailed into the sides of the balloon studs.

Balloon Framing is “shielding” the majority of the building from the exterior plane. Thus the vertical studs are as long as there are available, up to the roof or 20′ whichever applies. The post and beam also called “stick” framing, is floor by floor construction. Meaning, each level is a basis for the next.

The difference being, the “ballooning” studs are continuous through the floors, and the floor ledger anchors the joists to the wall element. There will be more bolting at the interior of the building. Essentially, the exterior walls serve as singular elements that are continuous and thus have less “leaks”. The exterior sheathing plane can be continuous and uninterrupted.

In “stick” framing, each level is setup on top of the next. Thus, in a major event, the levels can be separated by shifting of the upper and lower planes at different velocities according to the tornado, hurricane, flood, or earthquake movement affecting the levels.

In the current era, “stick” framing is becoming more conventional, for ease of construction, and to eliminate errors that result in balloon framing from long-term shifts, in the foundations through settlements, etc. Balloon framing may mean higher maintenance costs in a non-affected environment, with no high-level severe events, as steel and wood eventually creep, and bowing is more susceptible in the long members.

Post and Beam construction is like finite element analysis, designing to the element. It is assembling the smaller parts to establish the whole, and the connections are just fitting elements. Whereas for the latter, the connections are a major part of the design.

These are the difference between balloon framing and post & beam construction