How do cranes keep rising while building skyscrapers and how do they take them down when finished? 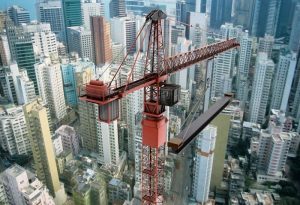 A crane is a pulley system used to move very heavy loads both vertically and horizontally. They are a vital part of skyscraper construction, because they are the only devices capable of moving up the heavy materials needed to construct the upper stories.

Raising Cranes on to skycrappers

In either case, the question remains: how is the crane placed so that it can continually rise with the skyscraper, and how is the crane taken back down when the building is finished? The answers to both are deceivingly simple. Building the crane up is a relatively easy task accomplished mostly by the crane itself.

The scaffolding or “mast” that the crane is supported on is built by the crane itself, level by level. Powerful hydraulic rams are then used to push the crane up another level (sometimes this is done first, and the new piece of mast is inserted underneath the crane.

The crane then locks into place and does its work until it is ready to move up another level. Eventually, according to the type of crane and the weight and mass involved, workers will add stabilizers that connect the crane’s scaffolding to the skyscraper itself, giving it needed support as it reaches the top of the building.

When the skyscraper is done, the crane is quite literally dismantled, piece by piece. This happens several ways, depending on the type of crane, but most cranes are made to be easily taken apart. Usually the large crane will hoist up a smaller crane that is connected to the top of the skyscraper.

This allows workers to detach pieces of the primary crane and slowly lower them back down to the ground. The mast itself and the base of the crane are lowered down by the same hydraulic rams that lifted them up, with each level of the mast being taken apart before the base is lowered.