Is it possible to build a skyscraper 2 kilometers high?

It is. But it will demand a monstrous budget and the need to research new ways to improve existing construction systems.

Skycrapers have been adding meters to their buildings with a steady flow since 1880.

Dreaming about reaching the 2 km goal might seem crazy today the same way it would have sounded 120 years ago.

Without judging the need and sustainability of a building such as the one proposed, I believe that it will be a challenge that will surely help to drive the innovation of engineers and architects, plus a whole industry associated to construction including aerospace, chemical and high tech.

I reckon that a combination of a concrete and a steel structure will allow to reach the desired height.

The building will be designed as a crane system allowing to lift materials and people.

There was an ambitious project called X-Seed 4000 – Wikipedia by which the designers planned to build up to 4 km high. It was never developed beyond a concept design though. 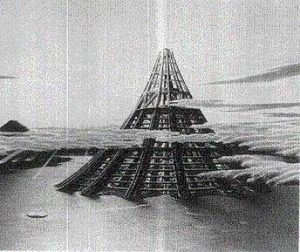 There is also another project called Sky Mile Tower which is planned to have more than 1.600 meters high.

So as you can see, we are slowly reaching new heights that can eventually reach the 2.000 meters.