No, not the pyramid. 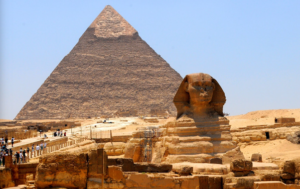 Everyone already knows about the pyramid. A million answers have already been written about that.

The sphinx doesn’t get enough love. It was carved from a single giant block of limestone.

The finished product is 63 meters long and 20 meters high. It was no small feat to build. They estimate that it required 100 workers, a full 3 years to construct, using manual tools, shovels, and picks. 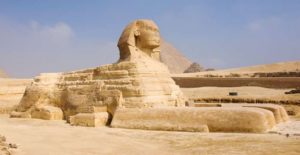 The paws of this giant will stand twice as tall as you stand.

It was originally painted, and had a more detailed face, notably, with a nose (which they speculate was vandalized by Muhammad Sa’im al-Dahr, who saw the statue as a form of idolatry).

It continues to be eroded by the elements today, but it won’t be gone in your lifetime.

Imagine a world, hundreds of years ago, where information did not flow freely. You came across the desert, exploring the world around you with peers.

And as you arrived, these structures began to reveal themselves.

You would be in awe of what was in front of you. It would be a spiritual experience. Structures like this simply didn’t exist anywhere else.