There are three fundamental reasons why trains on Indian railways are much slower than those in other countries. These three are; Trespassing, Poor design of rakes and Tracks.

Where would you find it safest to drive at that speed?

Obviously, you would feel the safest to do so on the expressway.

Because the expressway is access controlled, without intersections. The road is lined with barbed-wire fence. There is no chance of stray cattle/people coming onto the road.

This is a high-speed line in Japan:

And this is a common sight on Indian railway tracks:’ 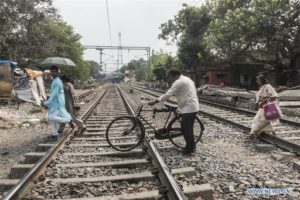 If you notice, the tracks in Japan are fenced while those in India are not. In India, due to constant pedestrian and animal trespassing, maintaining a high average speed is very unsafe.

Trains not designed for high speed:

If you notice, there is a gap between the compartments. Even in AC compartments, there is enough gap for air to pass into the coaches. This creates excessive drag, and at high speeds, it can cause the coaches to lift into the air. On high speed rails in other countries, the gap between the coaches is fully sealed( to the extent that it does not allow air from outside to seep in). That’s the reason the newly inaugurated Tejas Express and Vande Bharat Express in our country have fully sealed rakes.

Trains are further slowed down due to the Non-AC rakes, thanks to their air resistance. When we want to go fast in a car, we close the windows to minimize air drag. In Non-AC rakes, the doors and windows are always open. Also, that’s the reason why all of the fastest trains on our railways have only AC rakes.

Neither is the engine aerodynamic. Indian trains are pulled by flat-faced engines, while high speed trains have sleeker dolphin-nosed engines.

Moreover, the tracks on many routes are inadequate for the volume of traffic passing through it. This leads to freight and ordinary passenger trains waiting for several minutes on track sidings to let high end trains pass. Again, this brings down the average speed of the train.

These are the main reasons why trains on Indian railways are much slower compared to many other countries.