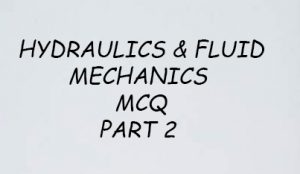 Question No. 1
Steady flow occurs when
(A) The direction and magnitude of the velocity at all points are identical
(B) The velocity of successive fluid particles, at any point, is the same at successive periods of time
(C) The magnitude and direction of the velocity do not change from point to point in the fluid
(D) The fluid particles move in plane or parallel planes and the streamline patterns are identical in each plane

Question No. 2
A flow is called super-sonic if the
(A) Velocity of flow is very high
(B) Discharge is difficult to measure
(C) Mach number is between 1 and 6
(D) None of these

Question No. 3
In a forced vortex, the velocity of flow everywhere within the fluid is
(A) Maximum
(B) Minimum
(C) Zero
(D) Nonzero finite

Question No. 4
Mach number is significant in
(A) Supersonics, as with projectiles and jet propulsion
(B) Full immersion or completely enclosed flow, as with pipes, aircraft wings, nozzles etc.
(C) Simultaneous motion through two fluids where there is a surface of discontinuity, gravity force, and wave making effects, as with ship’s hulls
(D) All of the above

Question No. 6
In order that flow takes place between two points in a pipeline, the differential pressure between these points must be more than
(A) Frictional force
(B) Viscosity
(C) Surface friction
(D) All of the above

Question No. 8
The value of coefficient of velocity for a sharp edged orifice __________ with the head of water.
(A) Decreases
(B) Increases
(C) Remain same
(D) None of these

Question No. 10
The ratio of the inertia force to the __________ is called Euler’s number.
(A) Pressure force
(B) Elastic force
(C) Surface tension force
(D) Viscous force
Answer: Option A