Is it possible to construct a slab without columns only on walls?

It essentially consists of thick, heavy masonry walls of brick or stone that support the entire structure, including the horizontal floor slabs, which could be made of reinforced concrete, wood, or steel members.

The key idea with this construction is that every wall acts as a load carrying element. Therefore, the walls must be strong enough for the purpose and are usually 9 inches or more in thickness. 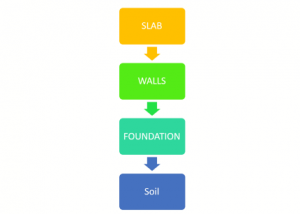 You see here!!! There is no column to take the load of slab. Slab load is directly transfered to walls then foundation then to the soil.

The structural system is of two types –

You can use load bearing system and create a slab on support of walls. But it depends how many floors you want to take up too.