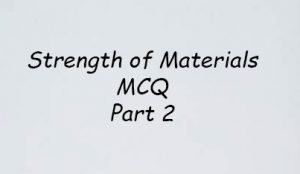 Question No. 1
Which of the following do not have identical dimensions?
(A) Momentum and impulse
(B) Torque and energy
(C) Torque and work
(D) Moment of a force and angular momentum

Question No. 3
Two coplanar couples having equal and opposite moments
(A) Balance each other
(B) Produce a couple and an unbalanced force
(C) Are equivalent
(D) Produce a moment of couple

Question No. 4
If a suspended body is struck at the centre of percussion, then the pressure on die axis passing through the point of suspension will be
(A) Maximum
(B) Minimum
(C) Zero
(D) Infinity

Question No. 6
The center of gravity of a uniform lamina lies at
(A) The center of heavy portion
(B) The bottom surface
(C) The midpoint of its axis
(D) All of the above

Question No. 7
The bending moment at E for the structure shown in below figure, is