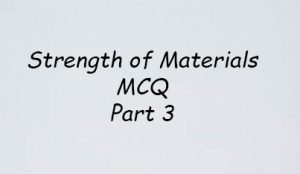 Question No. 1
A heavy string attached at two ends at same horizontal level and when central dip is very small approaches the following curve
(A) Catenary
(B) Parabola
(C) Hyperbola
(D) Elliptical

Question No. 3
Pick up the correct statement from the following:
(A) The distance of the eccentric axial load from the C.G. beyond which tension develops, is known as kern distance
(B) In visco-elastic material, stress-strain relation is dependent on time
(C) An orthotropic material has different properties in three mutually perpendicular directions
(D) All the above

Question No. 5
If a three hinged parabolic arch carries a uniformly distributed load on its entire span, every section of the arch resists.
(A) Compressive force
(B) Tensile force
(C) Shear force
(D) Bending moment

Question No. 6
The under mentioned type is simple strain
(A) Tensile strain
(B) Compressive strain
(C) Shear strain
(D) All the above

Question No. 8
The reaction at support A of the beam shown in below figure, is

Question No. 9
In a solid arch, shear force acts
(A) Vertically upwards
(B) Along the axis of the arch
(C) Perpendicular to the axis of arch
(D) Tangentially to the arch

Question No. 10
The maximum frictional force which comes into play when a body just begins to slide over another surface is called
(A) Limiting friction
(B) Sliding friction
(C) Rolling friction
(D) Kinematic friction