What are the things Civil Engineers know while others don’t

All the world maps that we see and study are wrong (Misleading). The maps of even large countries like US, India and Russia are wrong too.

This is something that civil, surveying engineers, GIS experts and cartographers will know in depth.

Here is the world map that we see often: 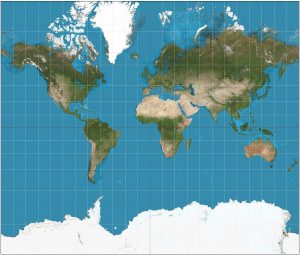 Let me explain how is it wrong: Look GREENLAND closely. It is covered in white on top. Now look at INDIA. See the point?

But on the map Greenland seems to be bigger than India and roughly equal to Africa. In reality, Africa is 14 times bigger than Greenland.

Its shape on the world map looks like this:

But in reality, CANADA is much smaller and like this:

See the distortion in the top?

The reason is that our earth is a 3 D structure of spherical shape called oblate spheroid and we are trying to put that into our 2 D page or image. This is simply impossible without distortions in shape, size or directions etc.

There are various projection techniques to put the 3D Earth into a 2D map. One of them is Mercaptor projection technique created by Flemish cartographer Gerardus Mercator in 1569. It’s been widely used for centuries, including today in various forms by Google Maps and many other online services. This map preserves directional bearing, presenting rhumbs (imaginary lines that cut all meridians at the same angle) as straight lines, thus making it a useful tool for navigation.

The world map shown at the beginning is the most popular and accepted by navigators worldwide. It is made by mercpator projection technique.

There are other projection techniques like – Gall peters projection, Lambert cylindrical etc

One alternative world map made by Gall peters projection is this: 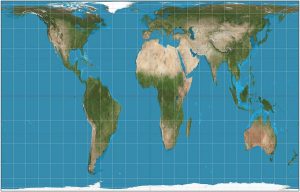 It has better relative areas but many parts are stretched in it.

Now, the question is despite so much distortions in the areas (Sizes) of countries in the map, why are we still following?

Because NO projection can perfectly show all the important parameters like shape, size, direction etc. If we perfect one, there will be distortions in the other. Since map is a navigational tool made to felicitate trade, shipping etc mercaptor projection preserves shape and direction better than others and is widely accepted. however, there are other local country specific standards based on other projections which show their country features perfectly.

If size/ area is our priority then we can get a map from another projection which perfectly shows areas but distorts shapes etc.

Many organizations and schools have accepted another projection based map called Winkel- Triple projection map. Here it is: 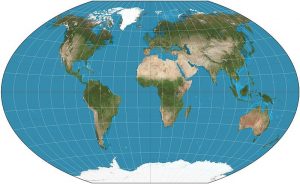 It is one of the maps with least distortions. 🙂