Simplest architect’s definition : ”How long and thin is something , basically ratio of its length to its width”

Simplest engineer’s definition : “How likely are the chances of the column to fail by buckling, basically ratio of effective length to its min. radius of gyration”

Note that long and thin columns are more likely to fail by buckling. So, both definitions are somewhat same.

Even the simplest definitions are hard to understand,isn’t it?

So,do you have a blue ball Pen? It has to be blue,if you know me I’ve an obsession with blue.

Just disassemble the pen. Unscrew the top cap and tell me what you see? You see that narrow tube in which ink is filled? Yeah!! That’s called a refill.

Now, go to the refrigerator. Take out that chilled cola can. Now, that is something what engineers like to call “NOT SO SLENDER” column or “short and wide” column.

Oh! I hope you didn’t throw away the refill because we’ll be needing it to do some experiments. Take the refill and push it from both sides. It would look something like this. Notice how it bends!! 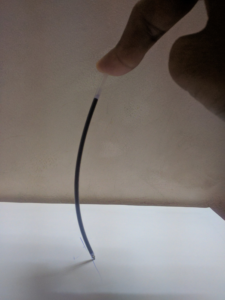 Do the same thing with cola can. Make sure you drink that useless fizz drink first. Now, push it with all your might. If you can’t, then get some exposure to gamma radiation and become a green monster and try again!! If you get success, It would look something like this. Notice it crushed this time and not bent as in the case of the pen refill.

Observation #2– Something that’s slender goes sideways when pushed. (Going sideways is called buckling). From now on I will refer swaying sideways as Buckling.

Something that’s not so slender do not buckle, instead that thing just gets crushed. (It is also called crushing failure).

Now. Engineers were confused. They wanted to know which column would buckle. Why? Because the column which buckle are designed in a different way and which gets crushed are designed in a little different manner. So its important to know which column would buckle beforehand. Now they knew that there is some relationship between being thin and buckling sideways .So, they somewhat modified the architectural definition of the slenderness according to their needs which would tell if the column will get buckle or not. And that term my friend is called slenderness ratio (measurement of how thin and long a column is).

Notice that engineer’s definition focuses on buckling and not on the dimensions of the member. Lets say, if something is long and thin, and it does not buckle means it is not slender according to engineers.

Now, how is it if something is long and thin, and it does not buckle?

The answer lies in how you support the column. If you support and restrain it very well from both sides(say fixed supports both sides), it will be hard to buckle for the same load you’ve used before. If you restrain it less(say one way fixed and other way pinned), it will be relatively easy. So, to accommodate that effect, we apply a restrain factor to length which gives us the effective length.

So, basically i lied, that is, the column would buckle for sure, but at a greater load.

We know now that Engineers definition of the slenderness ratio (basically tendency to buckle) depends not on physical length but instead on effective length unlike our architect’s definition.

Effective length also tells us the length under which effective bending is happening.

I hope I make sense till now.

Now, buckling is bending. Only difference is that loading is axial. And when we try to bend a something. Material resists. And this resistance in case of columns represented by radius if gyration. Radius of gyration tells how much c/s area is distributed along the axis of rotation. It somewhat defines the rotational stability of the buckling column.

Lesser the RG, lesser the resistance (read moment of inertia) of column for a constant area. More the RG, More the resistance to bending. so Harder to bend. So a quick question. If I try to buckle an elliptical column, from where would it buckle? You will be right if you say it’ll buckle in the direction of the shorter dimension. Why? because less radius of gyration,so less moment of inertia, so less resistance. so easier to buckle.

We also know now that Engineers definition of the slenderness ratio does not depend on width but instead on the width which provides least resistance to buckling.

Phew!! I am tired now and I’m super lazy to write more. Please comment if any doubts and Please tell me how I did.

If you liked what I wrote, read my other answers: